The historical building of Kariho Brewery was established in 1850. During this era Japan started to open up the country:it was the dawning of a new era. The brewery is constructed along the Omono River which was used as a center of water transportation.

The years passed, and in 1913, Ito Kyonosuke Okina who owned a brewery in the neighboring village took over a brewery and started another sake business with colleagues. This is the starting point of Kariho Brewery. The sake was named Kariho based on the Waka(traditional Japanese poetry) which was written by the Tenchi Emperor. This Waka shows respect for the farmers who work hard to cultivate the rice fields. This has deep meaning for all sake producers.

Kariho Brewery is located in Akita’s rice basket. Akita prefecture enjoys four different seasons with a humid and warm climate from summer to autumn which provides perfect conditions for growing sake rice. In addition to that, during winter it has a cold climate and a lot of snow which provides great condition for brewing.

Freshwater fishes are in the Omono river

Sake from Kariho is brewed by Master Toji, who is an expert in brewing, young Kurabito workers who bring new ideas to brewery, and Female Kurabito workers who have the sensitivity towards products. Harmonizing all of them, traditional ways and new ways create the beautiful Sake of Kariho.

Our water comes from natural aquifers from the Ou mountains. It infiltrates the gravel layer, so water is abundant the whole year. It contains minerals which keep the fermentation well on track.

The Kariho brand is characterized by its traditional yamahai brewing method. In this method the sake is kept fermenting for as long as 60days at a low temperature. The use of naturally-produced lactic acid and yeast cells creates a silky taste and various flavor components. The taste of yamahai-style sake excels in bringing out the flavor of other dishes. Yamahai sake is also brewed with natural yeast that comes from our brewery. 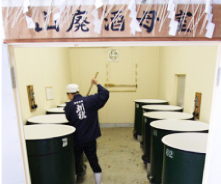 The last step of Brewing is the traditional way of pressing which is called Sakafune Shibori. Kariho Brewery has 6 “Sakafune(ships)” to press sake which is very rare nowadays. Sakafune Shibori is time consuming and takes up a lot of energy and because of that there are only a few brewers who actually use this process for all products. It takes 2days of pressing to make well balanced, well matured, strong sake which is characteristic of Kariho Brewery.